So far, finding vegan food on the road hasn’t been a challenge at all. We easily found vegan-friendly restaurants in Jensen Beach and Stuart, Florida while we were in the area while we were staying at Savannas Recreation Area Campground and running over to Hutchinson Island to visit Kevin’s parents. We found all of these places via Happy Cow. Bunkhouse Coffee Bar just opened in November of 2016, but it looks like she is already building up a nice clientele. While it isn’t 100% vegan, the owner is so there are plenty of excellent options including some gluten free. With smoothies and acai bowls, it’s an ideal place for breakfast, but she also has light lunch choices. And, we just saw that she’s adding panini to the menu. Oh, and the coffee is great! We utterly failed to take photos of our coffees, though. Oh, and you might be conned into playing fetch with the owner’s dog. She can be persuasive!

We saw on their menu that The Taco Shack had some interesting vegan options in addition to your standard omnivore fare. So we decided to go there with Kevin’s parents. We ordered chips & guacamole that quickly disappeared. The tacos did cost more than we used to pay in Atlanta, but the food was good and different so I’m not complaining. Fruits and Roots is a juice bar, but it also has a full menu of sandwiches and other goodies. They had a local kombucha on tap, so I got that. We rarely turn down a house made or on-tap kombucha. It was the kind of kombucha I like, not too sweet. Kevin ordered coffee, and they bring it with their house made mylk. The flatbread special that day sounded really good, so we ordered that along with our sandwiches. It was peanut butter and jelly with banana, coconut, hemp seeds and pumpkin seeds. It turned out the flat bread was huge and filling! Two could have shared that for breakfast and been completely satisfied. For lunch, I got the All Day Tempeh, and Kevin got the house made Black Bean Burger. The tempeh was lightly smoky, and the black bean burger was flavorful. Both were delicious and totally filling without the flatbread prequel. 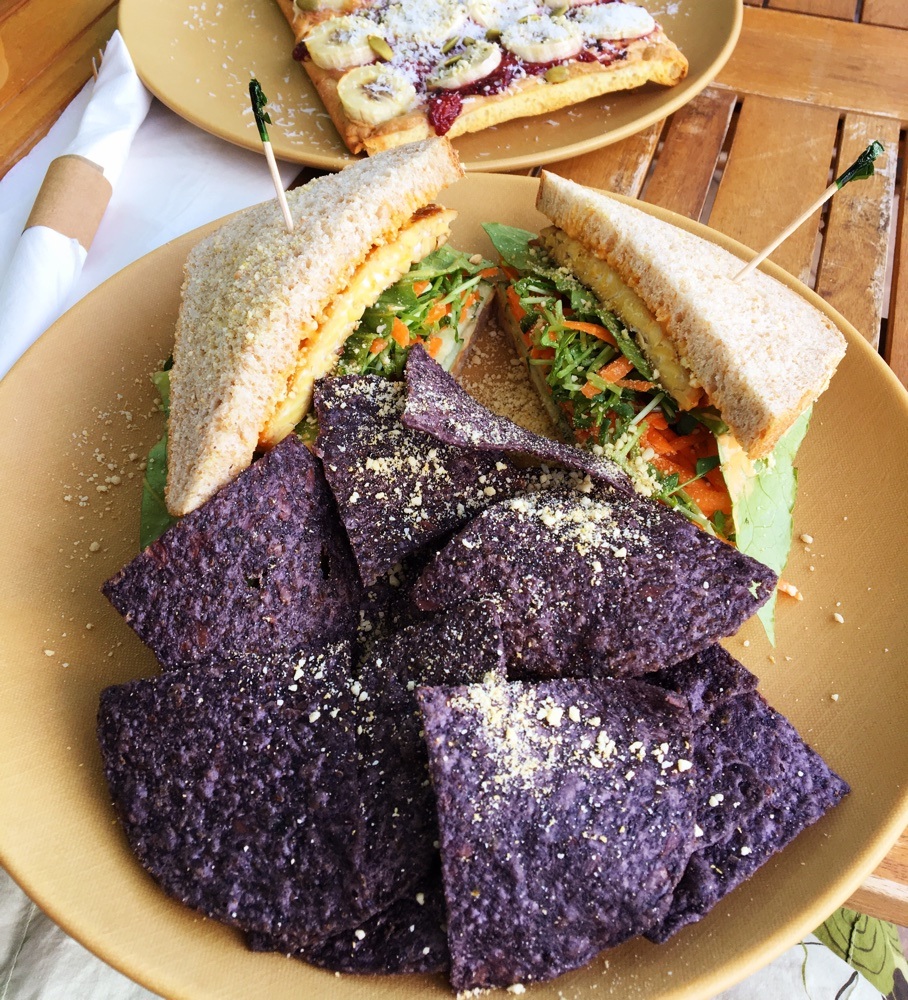 All in all, we were pleased with the vegan-friendly restaurants in Jensen Beach and Stuart, Florida. There are more options than there have been in the past. While we love an entirely vegan menu, we also really appreciate restaurants that take the time to have tasty and satisfying vegan options on their menu rather than the standard hummus plate or whatever Cisco has for a veggie burger.

___TVE_SHORTCODE_RAW__<p>Did you know that you can make a vegan tofu salad that's an excellent replica of egg salad? The magic ingredient is <a href="http://amzn.to/2h6zm8y" target="_blank" rel="noopener">kala namak or black salt</a>. It has a sulfur smell just like eggs. If that turns you off, just leave it out.</p> <h2>Egg ...